Yes, There Will Be A “Dr.” in the White House 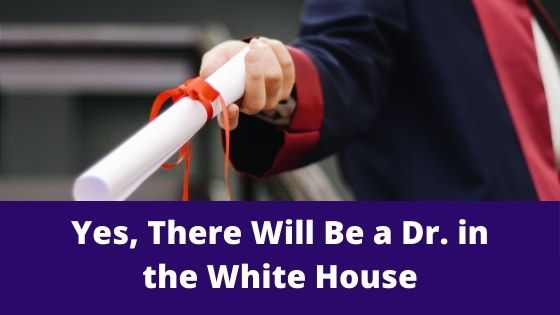 I was very disappointed with the op-ed written by The Wall Street Journal reporter Joseph Epstein suggesting that Jill Biden drop the “Dr.” before her name: “Dr. Jill Biden sounds and feels fraudulent, not to say a touch comic,” wrote Epstein, who opened his op-ed by addressing President-elect Joe Biden’s wife as “Madame First Lady—Mrs. Biden—Jill—kiddo.”

According to Wikipedia, a Doctor of Philosophy (PhD, Ph.D., or DPhil; Latin philosophiae doctor or doctor philosophiae) is the highest university degree that is conferred after a course of study by universities in most countries. PhDs are awarded for programs across the whole breadth of academic fields. Individuals who have earned a Doctor of Philosophy degree may, in many jurisdictions, use the title Doctor (often abbreviated “Dr” or “Dr.”) with their name, although the proper etiquette associated with this usage may also be subject to the professional ethics of their own scholarly field, culture, or society. Those who teach at universities or work in academic, educational, or research fields are usually addressed by this title “professionally and socially in a salutation or conversation.”

Based on the definition, you don’t need to deliver a baby to hold the “Dr.” title. You can hold a doctorate in various fields.

Epstein taught at Northwestern University 20 years ago and never earned his doctoral degree. He seems to believe that gives him a right to discount Dr. Jill Biden’s degree. As a self-proclaimed feminist, I’m going to call it what it is—disrespectful, male chauvinist thinking.

I’ve worked as an adjunct professor at New York University and understand how important having a “Dr.” title can be. I also know many PhDs who take their degrees seriously.  I see nothing wrong with bestowing this title on those with the discipline who have put in the hard work to earn the highest degree in their chosen fields of expertise.

Many high-profile individuals have received honorary degrees for their outstanding contributions to society. In this case, it is customary not to use the formal title. It would be different if Dr. Jill had been bestowed an honorary degree. However, she actually earned her Doctor of Education at the University of Delaware.

She is considered an expert in her field and continued to teach while serving as Second Lady during the Obama presidency.

So, what is the big deal regarding Dr. Jill Biden’s doctoral degree? She worked hard for it and deserves the respect that comes with the title.

To answer Mr. Epstein’s question: Yes, there will be a Dr. in the White House. It’s First Lady Dr. Jill Biden to you!